What is an orphan drug?

An orphan drug is a medication or other medicinal product used to treat a rare disease or disorder. It is called an “orphan drug” because due to its limited market, it is unlikely to be adopted by a pharmaceutical company. Selling to only a small group of patients, a drug manufacturer would likely not be able to recover development and marketing costs, let alone make a profit by producing the product. 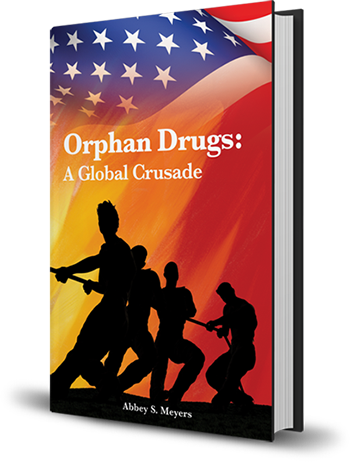 Ms. Abbey Meyers wrote her memoirs in this book in an effort to document the issues that led to the enactment of the “Orphan Drug Act of 1983” in the United States and the extraordinary scientific and industrial progress that ensued, including the development of Orphan Drug legislation in other industrialized countries around the world.

Abbey S. Meyers is the Founder and Past President of the National Organization for Rare Disorders (NORD), a coalition of national voluntary health agencies and a clearinghouse for information about little known illnesses. Abbey currently holds the honorary title of President Emeritus of NORD, and in the past she also served as Honorary President of the European Organization for Rare Disorders (EURORDIS) before she retired from her busy life as a leader of the rare disease consumer movement in 2009.

Ms. Meyers is the recipient of the FDA Commissioner's Special Citation for Exceptional Dedication and Achievements on Behalf of All People Afflicted with Rare Disorders (1988), and the Department of Health and Human Services Public Health Service Award for Exceptional Achievements in Orphan Drug Development (1985). She holds an Honorary Doctorate from Alfred University in New York and is considered the primary consumer advocate responsible for passage of the Orphan Drug Act of 1983.

Throughout her career, Ms. Meyers has been sitting on many committees, boards and commissions dealing with orphan diseases at the national and international levels.

She is also the author of many articles and papers related to this topic and has been a frequent speaker at numerous conferences in North America, Europe and Asia.

This site is intended for Canadian residents only. Medical practices, products and/or regulations may differ from one country to another. As a result, the medical and/or product information on this site is not appropriate for use outside of Canada. The information is not meant to suggest any medical course of action. Rather, it is intended to inform and to raise awareness so that these issues can be discussed with qualified healthcare professionals.